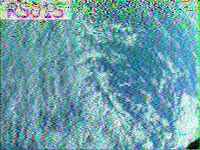 The current orbit of ARISSat-1 has it exiting the eclipse over the northern hemisphere and thus does not become active until it reaches the lower latitudes. This means it should be fully active for the southern hemisphere during the day and part of the evening (until it enters the orbital eclipse). This image was recently captured by ZS6BMN.
at 14:34 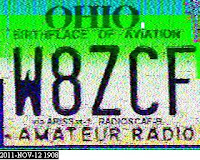 W8ZCF and KB8VCO were successful in transmitting a picture and receiving back an image via the ARISSat-1 transponder. This image of a license plate was received on November 12, 2011 at 1908 UTC.
Separate MMSSTV software setups on 2 computers with mode Robot 36 were used to Tx 435.750 LSB up and Rx 145.930 MHz down. It was a challenge, over several days of trying, to find the satellite in a favorable position with its (inadvertently) shortened antenna. Doppler along with Tx and Rx antennas were manually controlled. [info from AMSAT-BB]
at 19:08 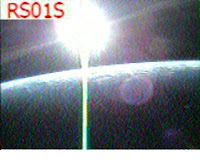 This image received by EB3SA over Europe looks more like a scene from a science fiction show or painting. The image captures the sun as it is rising over Europe and welcoming a new day.
Some postings are beginning to speculate as to when ARISSat-1 will re-enter but the guesses are still pretty wide. They range from December 2011 to April 2012. Should be interesting to see if it transmits any images just prior to burning up.
at 16:40 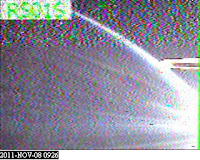 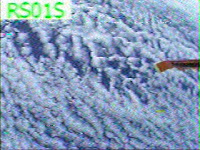 We start over today for the collection of initial images to be displayed on the AMSAT Gallery. This very nice image of some clouds was our first for the month and received by JAøCAW. I hope we will have even more to choose from this month with the satellite entering a period of greater illumination.
at 13:02