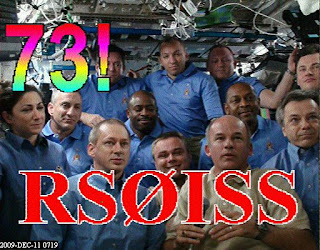 This image taken while the shuttle and former expedition crew were still on the ISS was caputure by G8OQW in PD160 mode in MMSSTV while the ISS was over Europe about 0719 UTC. The best images are on the gallery but you can see the other submissions at http://www.amsat.org/amsat/ariss/SSTV/archive.php
at 13:50 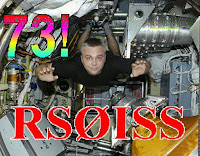 This image (above) of Maxim Suraev was sent in mode PD160 from the ISS using MMSSTV. PDØRKC captured the image about 0700 UTC on Dec 10 while the ISS was over Europe. More captured images are posted at http://www.amsat.org/amsat/ariss/SSTV/.
at 15:49

Another activation of the MAI-75 experiment using the SSTV system is scheduled from about 0700-1100 UTC on Dec 09-11. Various modes are expected with the downlink frequency being 145.80 MHz. Most activity will be in range of Moscow but some transmissions could occur beyond that region.
at 12:44

SQ6NDM from Poland captured this image taken inside the Russian Service Module as the ISS passed over Europe at 13:35 UTC. According to the crew timeline, they were having their midday meal. The MAI-75 experiment has finished for today. See some of the other imagery caputred on the ARISS Gallery at http://www.amsat.org/amsat/ariss/SSTV/ 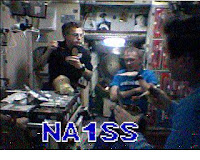 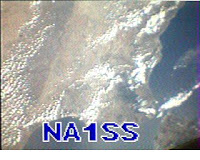 As announced, some images have come down. G8OQW captured this view of the coast. ISS was passing over the Southern tip of Spain at the time (1301 UTC). 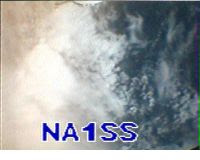 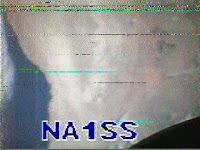 The Russian team will be again activating the SSTV system on Aug 3 and 4 using the VC-H1 system. Images should be transmitted about once every 3 mintues for several hours each day (~0800-1600 UTC) on 145.800 MHz. Good luck and don't forget to post your images on the gallery at http://www.amsat.org/amsat/ariss/SSTV/.
at 23:47

It appears that the Russians will have SSTV active for parts of May 26 and 27 as part of an experiment ( http://www.energia.ru/eng/iss/researches/education-26.html) they are conducting at the Moscow Aviation Institute. Enjoy the images out the window while they last. See some of the captured images at http://www.amsat.org/amsat/ariss/SSTV/index.php
at 16:43

Final days on ISS for Simonyi

Space flight participant Charles Simonyi continues to transmit SSTV images and make random voice contacts. He will be leaving the International Space Station on April 8. Preparation for the return of the Expedition 18 crew of Mike Fincke and Yuri Lonchakov has already begun. The two will have spent nearly 6 months in space. Simonyi will return with them after his second trip of 13 days in orbit.
Images being sent by Simonyi are being sent manually. The images are taken earlier and then transmitted in rapid succession during passes mainly over N. America and Europe.
at 21:03 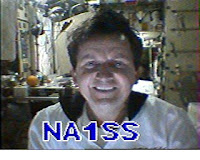 Charles sent numerous images in rapid succession over Europe during the ~1550 UTC pass. These are manually transmitted so the interval between images will vary and can be extremely short. One of the images from that pass of Charles was captured by PD0RKC. Charles is expected to continue sending images and making random QSOs in addition to the school contacts that are planned during his visit.

It appears that the VC-H1 has been left on in the window in auto mode after the crew has gone to sleep. This means it should capture and send whatever it can see about once every 3 minutes until the batteries run down. The bad news is for folks where it is night time, only a black image with possible interior reflections will be seen. For the folks in daytime, the image might be of your part of the world as seen out one of the windows in the Russian service module. Once the batteries go low, a purple image with the callsign will get sent and then eventually that will stop.

A recently published image from today showing the faint outline of the Soyuz as the ISS moved into darkness. Image caputured by W2DNR 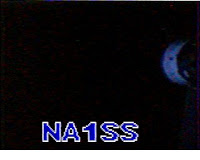 Some initial SSTV images were transmitted today (March 29) by Charles Simonyi using the VC-H1 unit on the ISS. Look for more images during his visit to the ISS.
at 01:38

Seeing a few reports that the SSTV system using the VC-H1 is active today on the International Space Station on the 145.80 downlink frequency. Hope some are fortunate enough to catch an image or two.

This image was captured by PD0RKC over Europe around 1745 UTC. The ISS was still in sun but the earth was in shadow. The reflections shows the VC-H1 unit quite clearly in the window.
at 17:41