SSTV will  be active starting October 27 around 10:00 UTC. The images will highlight the NASA on the air activity celebrating 60 years of NASA. The event will also celebrate NASA SCaN contributions to the ARISS program. More details to follow as they are known.

Below is the full news release from ARISS:

ARISS News Release   No. 18-12
Dave Jordan, AA4KN
ARISS PR
aa4kn@amsat.org
ARISS SSTV Joins with NASA On The Air for a Special Event
Oct. 19, 2018:
Amateur Radio OnThe International Space Station (ARISS) is planning a very special Slow Scan TV event currently scheduled to start October 27 about 10 am UTC. Helping to support the event will be NASA’s Space, Communication and Navigation (SCaN) Dept.
The Space Communications and Navigation (SCaN) program manages NASA’s three most important communications networks. The Space Network (SN), Near Earth Network (NEN), and the Deep Space Network (DSN.
Just as in past ARISS SSTV commemorations, 12 images will be downlinked, but this time with 6 featuring the SCaN educational activities while the other 6 images will commemorate  major NASA anniversaries, ie when NASA was established, astronauts first landing on the moon, etc.
In addition to the fun of receiving these images, participants can qualify for a special endorsement for the NASA On The Air (NOTA) celebration event. To learn more about NOTA, visit  ( https://nasaontheair.wordpress.com).
Once received, Images can be posted and viewed at http://www.spaceflightsoftware.com/ARISS_SSTV/index.php .The transmissions are expected to be broadcast at the usual frequency of 145.800 MHz using the PD-120 SSTV mode.
Please note that the event is dependent on other activities, schedules and crew responsibilities on the ISS and are subject to change at any time.
More information will follow soon, so please continue to check for news and the most current information on the  AMSAT.org and  ARISS.org websites, the AMSAT-BB@amsat.org, the ARISS facebook at Amateur Radio On The International Space Station (ARISS) and ARISS twitter @ARISS_status.
About ARISS
Amateur Radio on the International Space Station (ARISS) is a cooperative venture of international amateur radio societies and the space agencies that support theInternational Space Station (ISS).  In the United States, sponsors are the Radio Amateur Satellite Corporation (AMSAT), the American Radio Relay League (ARRL), the Center for the Advancement of Science in space (CASIS) and National Aeronautics and Space Administration (NASA). The primary goal of ARISS is to promote exploration of science, technology, engineering, and mathematics (STEM) topics by organizing scheduled contacts via amateur radio between crew members aboard the ISS and students in classrooms or public forms. Before and during these radio contacts, students, educators, parents, and communities learn about space, space technologies, and amateur radio. For more information, see  www.ariss.org.
Also join us on Facebook:  Amateur Radio on the International Space Station (ARISS)
Follow us on Twitter:  ARISS_status
Media Contact:
Dave Jordan, AA4KN
ARISS PR
**Oct. 23 Update**
Looks like the event will run continuously from Oct 27 starting around 10:00 UTC and ending Oct 29 around 19:30 UTC.

**Oct 27 Update**
Seems the event started with a bit of confusion. Images were initially being down linked on the wrong frequency. Another complication is that the MMSSTV overlay was active and covering some of the images.  Seems these are trying to be fixed so hopefully everyone can try to capture images as they were intended to be transmitted.

Looks like the folks at MAI will have an experiment run right at the end of July. Crew timeline shows activation of the SSTV system beginning with setup starting at 16:00 UTC on July 30. The system will be powered down that same day at 19:30 UTC. The next day (July 31), the system will be again active from 13:25-19:15 UTC. Downlink is presumed to be on the traditional 145.80 MHz frequency. Mode will likely be PD120 but not officially known at this time.
at 16:01

Looks like everyone had several opportunities to capture images from the ISS during the June 29-July 1, 2018 period (and even some extra time beyond what was announced). It appears the images were cut off on the sides but were still easy to visualize.

*** UPDATE** June 6
It seems someone on ISS has afforded everyone with an extension of SSTV operations. Nothing on the schedule so no idea how long it will last. Next school event (which needs the same radio) is on July 13. 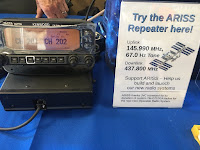 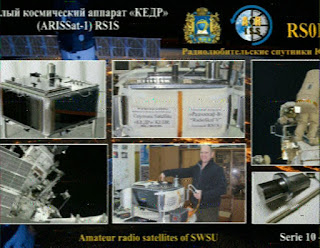 NASA on the air Award

In addition to the Interkosmos diploma (info in related article) you can also use your reception to qualify for the NASA on the air activity. Their website is https://nasaontheair.wordpress.com/ and has all the details about which NASA amateur radio clubs are supporting and when. Receiving ISS SSTV is listed in the rules section (https://nasaontheair.wordpress.com/rules/) and will be a nice addition to the award with this SSTV activity taking place for Cosmonautics day.
at 13:53

A special Award will be made available to those posting reception reports.
To obtain the Award one should receive and decode at least one picture during the activity period. The quality of the received image does not have to be perfect, but good enough to identify the picture. Partial images are acceptable.The award is in electronic format (JPG). It will be sent by e-mail.

The criteria as follows must be met to obtain the Award: Load your decoded images on the page: www.spaceflightsoftware.com/ARISS_SSTV/index.php

Details and a list of ARISS SSTV Award winning stations are available at:https://ariss.pzk.org.pl/sstv/


Thanks to Southgate and Armand, SP3QFE, for the above information.
at 15:59 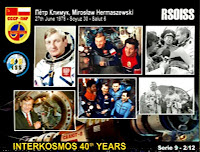