Bit late getting this info out due to being on travel to Russia (where I got it from the source). MAI-75 will be transmitting SSTV imagery and planning to use mode PD 120 on August 15 and 16 for a few orbits each day that pass over Moscow. MAI-75 scheduled operations times for Monday were scheduled to be from 11:05 - 15:35 UTC and Tuesday, Aug 16 are 11:10 - 16:45 UTC. Stations receiving images can post them to ARISS Gallery.

Despite the shorter operational period it seems that amateur operators worldwide were able to receive most of the MAI-75 series of image. Below are examples of ones posted to the ARISS Gallery.
It appears that#1, #10 and #12 were the rarest.

The SSTV image transmissions that were part of the celebration of ARISS operating on the ISS for over 15 years are coming to a close. Seems everyone finally had a chance to hear SSTV from the ISS. The nicest images are posted to the ARISS Gallery and all of the images posted are in the archive section.

Here are some examples of images captured during this event.

One note is that the #1 image appears to have been omitted possibly due to confusion with an image from an earlier series.

The MAI-75 event is next but only planned for a few hours. Details are in the previous post just below.
at 14:04

Details are a bit sketchy at this point but it appears that the Moscow Aviation Institute will be conduction SSTV image transmissions from ISS on April 14 from around 15:00 to 18:00 UTC and again on April 15 from around 14:00 to 19:00. It appears they will be using the large image quality transmission mode of PD290 during this period. Folks will have to be extremely lucky to capture a full image during a pass of the ISS since the transmission time for each image will be nearly 5 minutes and there should be a gap between image transmissions to reduce the duty cycle on the radio. Transmissions are planned to occur on 145.800 MHz.

*** Update (April 14)
Getting reports that PD180 is being used for MAI-75 as well. This could be to not changing the mode from the previous event or a change in operational planning. Will have to wait and see if the mode stays the same or changes.
at 20:24 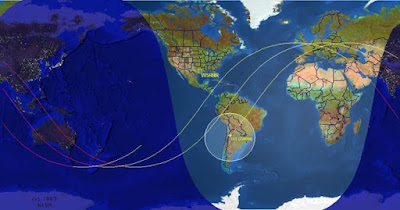