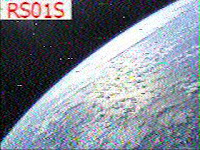 It appears that the current orbit of ARISSat-1 being mainly illuminated during Southern hemisphere passes has greatly reduced the number of captured images due to less participants in that part of the world . Ones that are being captured are of a lesser quality that received earlier. The orbit is slowly starting to favor afternoon and evening passes in the Northern hemisphere so we should start seeing an increase in images. This image was captured by ZS6BMN.
at 16:58