Today (Oct 15), Richard is scheduled to speak with his father in Moscow and the Mayor in Austin, Texas. He has installed the VC-H1 in the window and some very nice Earth views are being sent down on 145.800 in Robot-36. He has been heard making general contacts (when time permits) on the same downlink but using the standard 145.20 uplink over ITU region 1 (Europe, Africa and Russia) or 144.49 uplink over ITU regions 2&3 (everwhere else) . During the crew sleep cycle, the radio should be switched to packet operations on 145.825.
This image was image taken over western North America and received by KD7TOG. 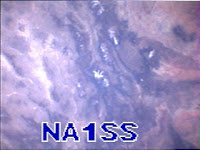 Below is an another image taken over western North America and received by KD8CAO. 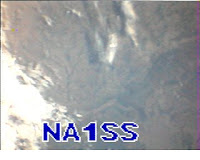