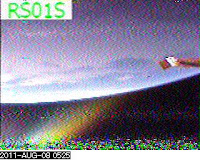 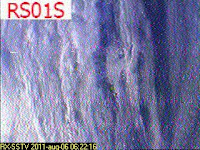 Several nice images were captured over the weekend. The first one (left) was received by JJøLTH and appears to show some land. The second one (below) was received by HA6KVC and shows another striking cloud view. The team now has a website that shows received telemetry from the satellite.
at 16:52